If you’ve been to the Ithaca Farmers Market (and if you haven’t, shame on you), you’ve surely seen the hoards of people lined up outside of stand number 50, eagerly awaiting a delicious meal. Khmer-Angkor Cambodian Food attracts countless students, visitors, and locals each week, all of whom deem the food worthy of a half-hour wait or more. Even on a cold, cloudy day in April, the line at Khmer-Angkor extends past the neighboring stands and out the market pavilion. Given the stand’s popularity, kitsch decided to go behind the counter and investigate its allure.

At almost 3 p.m., the Farme’s Market was closing for the day. Vendors at other stands were packing up or had already left, but there was still a line at Khmer-Angkor. When it finally died down, I was able to speak with the people working at the stall and hear their story. I quickly realized the passion they have for what they do, and was able to learn quite a bit about what keeps them, and their customers, coming back weekend after weekend. 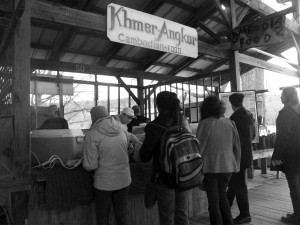 Marin Sen and her husband Bong have been running Khmer-Angkor at the Farmers Market for almost 13 years. The name is a combination of the Cambodian language Khmer and the Angkor Wat temple. Marin and Bong’s son, Soche, explained that his parents opened up the food booth as a side job—it was a fun way to spread Cambodian culture, while providing a little extra income.

“They have an application process here; they try to limit the competition,” he said, explaining how they got started. Given the Cambodian menu’s uniqueness, the Farmers Market accepted Marin’s application. Business was slow at first. “When we first opened up no one really knew what [Cambodian] food was,” Soche said. “Just trying to break that barrier was tricky at first, but eventually people saw the quality.”

Over the years, Marin and Bong Sen have established a strong customer base and have made a big impact on the Ithaca community. As a local, I remember making trips to the Farmers Market with my parents when I was younger, and lunch at the Cambodian stand was always a highlight. But Khmer-Angkor’s reach extends beyond the townie population—almost any Cornell student will tell you that upon arriving in Ithaca freshman year, the first thing he or she was told to try at the Farmers Market was one of Khmer-Angkor’s delicious dishes. In addition to the locals and the student population, Khmer-Angkor attracts many out-of-town visitors. “People travel from all over the place,” Soche explained. He said one couple from Albany used to come every weekend, and that they get a lot of visitors from Auburn, NY.

Soche enjoys talking to the people at the Farmers Market, loyal customers or first-timers alike. “We have a lot of regulars,” he said. “Some come every weekend so you get little snippets—you know, of their story, where they’re from.” Getting to know people is one of Soche’s favorite parts about working at the stall. “[Saying hello] to the family, the kids, all that fun jazz.”

While the menu may grow and change, the quality is always there. Despite serving more and more customers each year, “we try to keep that same consistency,” Soche expressed. “People appreciate it,” he added. “That’s not something that happens very often.” 12 years of consistent quality is indeed quite an accomplishment, one that hasn’t gone unrecognized—in 2011, Khmer-Angkor was voted the Best Booth at the Farmers Market by the Ithaca Times.

The menu has expanded over the years—at first, there were only about five dishes, and now the establishment offers more than ten different ones. While they would like to continue expanding the selection, Soche expressed that this might not be possible: “I feel like we’ve reached our max, because we’re running out of space.” The items on the menu are tailored to the customers’ tastes; Soche said that his mother “changes it up according to people’s preferences.” He continued to explain, “You don’t want to make it too hot, where they can’t even eat it, but they want it still flavorful, so it’s a happy medium.”

Despite these small adjustments, the food remains pretty true to typical Cambodian food. However, Soche said that the items on the menu are richer dishes that are often reserved for special occasions, not eaten as an everyday meal. “The [food] that we have here, my mom would make when I was younger, maybe once every couple months,” he said. “It was a treat.” As a result, Soche was upset at first when she began making them for strangers every weekend. He added, “I got over it and realized other people liked it too.” The sheer number of customers every weekend reiterates that. When asked about the long lines, Soche laughed. “I try not to look,” he said, explaining how they manage so many customers. “You look back and it just gets longer. So, I’ll believe everyone else when they say it’s long.”

I quickly learned that serving so many people on a weekly basis doesn’t come without a price. “We have to set up by 9 a.m. [when the Farmers Market opens], so we try to get here before 8 a.m.,” Soche told me. “We only have three other people helping us set up.”

Adding to these challenges, the family makes everything from scratch and cooks most of the food on-site. This effort comes through in the taste, but ensuring this type of quality and consistency takes a lot of work. In response to a question regarding the most challenging thing about what they do, Soche immediately responded that it was waking up so early. “We’re up at five o’clock in the morning because setting up the van is tough,” he said. Each weekend, they show up with all of their ingredients, cooking supplies, and other utensils, ready for the slew of hungry customers.

Soche and his parents all have full-time jobs elsewhere, and when the Farmers Market is open both Saturdays and Sundays, this can be a tiring routine. “As long as we don’t take it too seriously, we have some fun with it.”

Upon discovering that the stand is a side job, people often request that Khmer-Angkor open up a restaurant; however, keeping their business only at the Farmers Market is what helps it remain enjoyable. Soche explained that his parents actually tried opening a restaurant about eight years ago. “It just got too busy,” he said. “My parents started working their butts off, and they got tired of it.” After having the restaurant open for about two or three months, Bong and Marin sold it, ultimately deciding the Farmers Market was more their scene. “It’s seasonal, it’s only two days,” Soche said. After turning their hobby into a full-time job, “It wasn’t fun any more.”

While Soche likes getting to know the customers and learning about their experiences, he and his family have an amazing story of their own. Bong and Marin arrived in the U.S. in the early eighties, after leaving Cambodia during the Khmer Rouge and Pol Pot era. “When they were escaping, they were jumping from country to country,” Soche explained. “They had one of my brothers in Malaysia, another in Thailand, and finally me [four years after they got here] in 1986.” After several years as refugees, the Sen family was accepted to the U.S. and sponsored by the Immaculate Conception Church in downtown Ithaca.

“They came here with the clothes on their backs, not a penny to their name, and built a name for themselves,” Soche said, describing his parents’ work ethic. “They worked hard, got out of the system quick, then saved, and just kept on working.”

Soche has been helping his parents at the stand from the beginning. When asked how he got into it, he responded with a laugh: “I didn’t really have a choice,” he said before continuing. “My parents started doing it about 12 years ago, and I kinda got thrown into it.”

It seems that a lot of the credit for what Khmer-Angkor is known as today goes to Soche’s mother, Marin. “She’s the one who really got this thing going and kept it the way it is. She’s the brains of the operation, pretty much.”

Marin Sen is also the one to thank for the delicious recipes. “It’s all her, really. She’s the one who makes it all—we’re just her minions.”

Even though running the food stand every weekend can get hectic, it’s one of the ways Soche maintains ties to his Cambodian heritage. As a first generation American, Soche enjoys the opportunity to spread Cambodian culture through cooking. “Growing up I didn’t really learn the language too much, so this is the way I kind of pass on the culture,” he explained. He hopes this will preserve his Cambodian roots for the next generation: “if the language is lost, at least the food is still there.” I think it’s safe to say that everyone who has experienced Khmer-Angkor’s food is thankful for Soche’s and his parents’ eagerness to share their culture.

When asked if he had any words for their fans, Soche laughed. “I don’t know how many fans I have,” he joked. On a more serious note, he added, “We couldn’t do this without them. We’d just be making food for nobody, really.” Soche later reiterated how much he and his parents value their customers: “They make who we are.”

While I didn’t get the opportunity to speak with Bong Sen for very long or to meet Marin, I did leave with a strong admiration for this woman and her family, and the name they have made for themselves here in Ithaca. After only a 20-minute conversation with Soche, I understood the passion they have for what they do. The food at Khmer-Angkor speaks for itself; it is absolutely delicious. No one can deny that, not even the vegans, vegetarians, and lactose intolerant—all of the items on the menu are dairy-free. But there is a lot of good food at the Farmers Market. What makes the Khmer-Angkor Cambodian stand different is the people behind the counter.

This article was originally printed in kitsch, Vol. 11 Issue 2, “Hype”